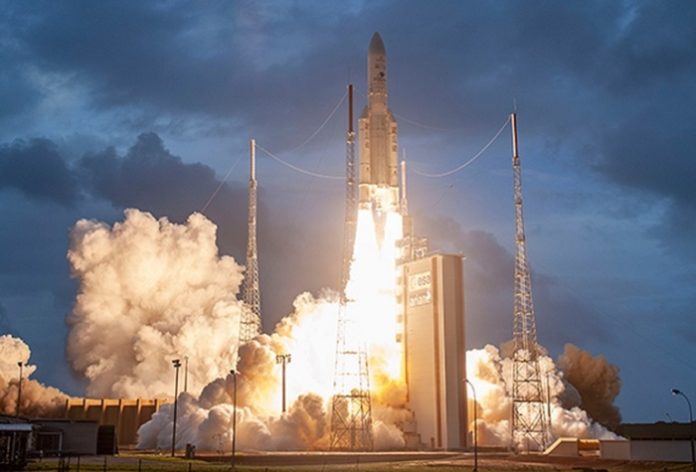 Yesterday, Arianespace conducted its first launch of 2020 with the Ariane 5 carrying ISRO’s GSAT-30 and Eutelsat’s Eutelsat Konnect into Geostationary Transfer Orbit (GTO), with a combined payload mass of 7,888 kg.

GSAT-30 was developed by ISRO using its I-3K platform, and will provide high-quality television, telecommunications and broadcasting services. It had an estimated mass of 3,357 kg at liftoff and will ensure continuity of service for India’s INSAT 4A, positioned at 83 deg. East.

EUTELSAT KONNECT, developed by Thales Alenia Space, is a new-generation high-throughput satellite serving Africa and Europe. In Africa, EUTELSAT KONNECT will, through the establishment of public Wi-Fi terminals, share internet access between several users, marketed in the form of coupons that can be paid via mobile phone.

Featuring all-electric propulsion and configured for operation in Ka-band, EUTELSAT KONNECT is the first satellite to use Thales Alenia Space’s Spacebus NEO platform, developed under the Neosat Partnership Project conducted by the European and French space agencies (ESA and CNES). It weighed an estimated 3,619 kg. at liftoff.