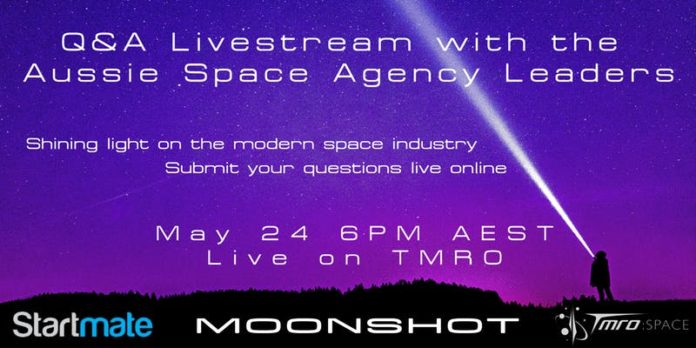 Troy McCann, CEO of Moonshot, will be hosting a live Q&A panel discussion with experts who have been leading the development of Australia’s new industry-focused Space Agency. On May 24 at 6pm AEST (08:00 UTC), McCann will be joined by the architects of Australia’s 21st century space industry. The Q&A panel will be live streamed on Youtube by interactive space webcast specialists, TMRO. The stream will be available at https://youtu.be/AZAV402rA4Y and questions may be asked through the accompanying chat-room.

The panelists, Dr Megan Clark, Dr Jason Held, Prof Steven Freeland and Flavia Tata Nardini are international space industry experts who were commissioned for a year long review of the global and Australian space industry by the Australian Government. They drafted a proposal which was put into action last week.

“The Australian Space Agency is the first step in creating a positive ecosystem where space startups and entrepreneurs can thrive,” says Troy McCann, Q&A facilitator, “but it’s even more crucial to understand what the first actions of the Agency will be, and how both local and international collaborations can be supported”.

Dr Jason Held is the CEO of Saber Astronautics, a space R&D company based in both Australia and the USA. Saber Astronautics combines the latest techniques in human factors, artificial intelligence, and dynamic 3D data visualization to dramatically reduce the cost of space operations.

Flavia Tata-Nardini is the CEO of Fleet Space Technologies, a space start-up based in Adelaide. Fleet aims to connect the world using fleets of small satellites, and has raised $5 million in Series A funding.

The announcement of Australia’s new space agency is followed by a joint venture between Australia’s most successful tech startup accelerator, Startmate, which is backed by heavyweights such as Atlassian’s Mike Cannon-Brookes, and Moonshot. The alliance is inviting high caliber space tech businesses from around the world to Australia in July for a 3-month program designed specifically to address the difficulties of growing a space tech company. Teams will be provided with access to funding, space tech resources, and an international network of space and entrepreneurship experts.