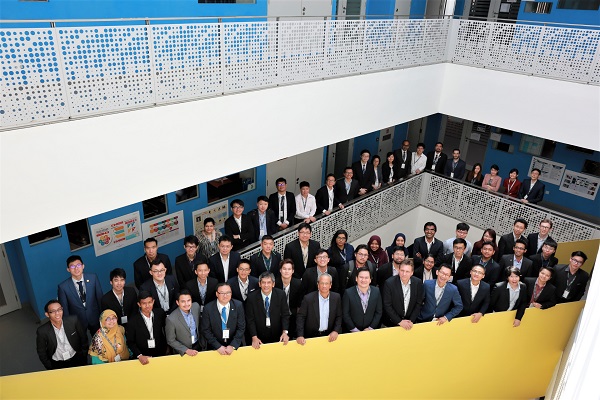 On 31 January 2018, Singapore hosted the first ever Space Generation [ASEAN] (SG[ASEAN]) Workshop, held at the National University of Singapore’s (NUS) Engineering Design and Innovation Centre (E2A). The event was jointly organized by the Space Generation Advisory Council (SGAC) based in Vienna, and the Singapore Space and Technology Association (SSTA), in conjunction with the Global Space and Technology Convention (GSTC) held from 1-2 February 2018.

The inaugural SG[ASEAN] Workshop, meant for students and young professionals, was a tremendous success. With only 40 delegate spaces available, the workshop received overwhelming response and eventually hosted approximately 60-70 participants from Singapore, Malaysia, Indonesia, the Philippines, Thailand, Myanmar, and non-ASEAN nations such as China and Japan.

Although relatively small, and very intimate, the importance of the event was attested to by the commitment of the region’s decision-makers towards being present, and making it a success. For example, Head of Indonesia’s space agency LAPAN, Prof Thomas Djamaluddin, attended the event at the end of the day, immediately after landing in Singapore from Jakarta.

The panel discussion centred on the importance of ASEAN space cooperation, with speakers highlighting the shared issues that all ASEAN countries face. Topics raised included common environmental and disaster management issues, the possibility of sharing resources, and how space can enhance development. Several lively debates took place during the Q&A section of the panel, particularly, on the roles of government and industry in growing the region’s space sector. (An in-depth feature on the panel will be published shortly on SpaceTech Asia.)

On the international panel were Prof. Dan Hastings, CEO & Director of the Singapore-MIT Alliance for Research & Technology, Dr. Ricky J. Lee, Adjunct Professor of Law at Australia’s University of Notre Dame, and Joerg Kreisel, CEO of JKIC and Chairman, IBOSS GMBH, who has been an active supporter of Singapore’s space activities for the past 10 years. The panel was moderated by Joanne Wong, SGAC National Point of Contact for Singapore.

Whereas the ASEAN panel focused largely on immediate issues that can be addressed in the short term, the International Panel took a broader perspective on ASEAN’s place in the global space industry. The speakers, who are all space industry veterans, shared their thoughts on how the space industry has changed since its birth in the Cold War era, and peppered their discussions with insightful anecdotes based on their personal experiences. Following that, they expressed their views on the space industry’s trajectory in the coming 50 years, and discussed such topics as the need for an update on regulations, asteroid mining and deep space exploration. They then suggested the ways in which ASEAN can contribute to these developments, e.g., by focusing on niche areas such as robotics.

After the panel discussions, participants broke into three working groups – Roadmap towards ASEAN Space Cooperation, Space Sustainability for Emerging Space States, and The Future ASEAN Space Economy. Participants were given more than 3 hours to discuss the issues and, at the end of the day, present their suggestions.

The event concluded with a presentation by Ayami Kojima from the Space Applications Section of the United Nations Office for Outer Space Affairs (UNOOSA), and a speech by Prof. Thomas Djamaluddin.

Watch what participants had to say about the event: