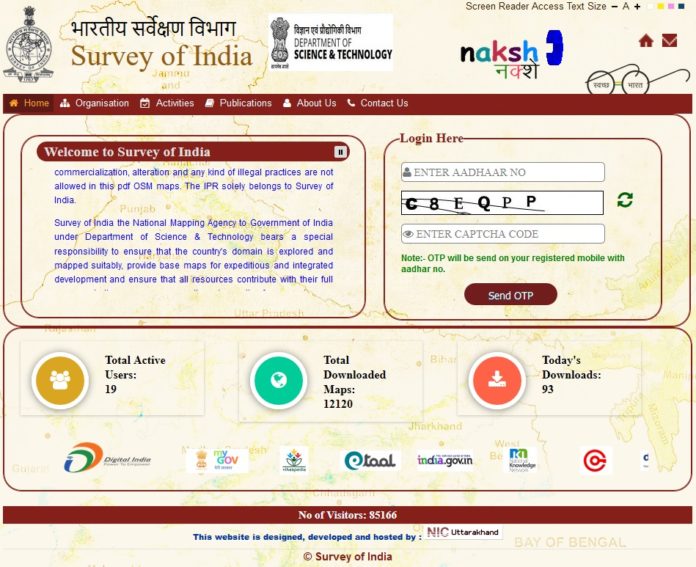 The Survey of India (SoI), a government organization in charge of mapping and surveying the nation, has launched its Nakshe web portal, which allows Indian citizens to download maps from its database.

The portal was unveiled to mark the 250 anniversary of the Survey of India, which was set up in 1767 and is the oldest scientific department of the Government of India.

These topographic maps, known also as Open Series Maps (OSM), gives users access to all current and archived maps the organization has collected since its inception, and can be downloaded as pdfs. To log in, citizens need to use their Aaadhar ID.

The launch of the portal was part of an event which included a panel discussion titled Geospatial Paradigm in India, which was attended by Minister of State for the Ministry of Science & Technology and Earth Sciences, Shri Y.S. Chowdary, Secretary, Department of Science & Technology, Dr. Ashutosh Sharma, Surveyor General of India Dr. Swarna Subba Rao and several other scientists and professionals of Geospatial Industry.

Since its launch a few days ago, the Nakshe portal has seen 100 registered users and 8120 maps downloaded, with the number increasing daily.

Also, in conjunction with 250th anniversary, the SoI has proposed to re-measure the height of Mount Everest later this year, as an ‘Indo-Nepal Joint Scientific Exercise’ along with Survey department of Nepal. The survey will use the latest technologies and take into account the effects of the Gorkha Earthquake of 2015. The last survey conducted by the SoI took place in 1956.