Independence-X Aerospace is a company of industry professionals and academics based out of Technology Park Malaysia in Kuala Lumpur with the aim of transforming Malaysia into a space hub as well contributing to socio-economic development of the region through space-related technologies.

It began with the mission to involve the industrial, commercial and education communities in space-related programs, so that Malaysia could be self-reliant in space technology.

Independence-X has close to 400 registered members today, with about 50 active members consisting of engineers, scientists, developers, artists, PR and management professionals in a total of over 20 departments. In the technical departments, propulsion, orbital mechanics, electrical power systems, ADCS, and space comms are some of the most prominent disciplines the team members focus on.

The company was celebrated as the only Malaysian (and Southeast Asian) team out of 16 teams worldwide participating in the Google Lunar XPRIZE (GLXP), and while the XPRIZE went unclaimed before being relaunched, Independence-X is still very much focused on its foundational goals.

We talk to Izmir Yamin, CEO of Independence-X (IDXA), on the activities of his company and the space landscape in Asia and Malaysia.

What are you currently working on at the moment?

We are currently working on our launch vehicle known as the DNLV (Dedicated Nano Launch Vehicle), which was endorsed by NASA in 2015. In parallel, we are also working on our miniaturized spacecraft for the moon mission.

How is the NewSpace community in Malaysia, and how do you see it growing in the coming years? What role can government and established companies play in developing the space sector?

The NewSpace community in Malaysia is practically non-existent (yet), as we are the only company working on product development and internationally recognized as NewSpace company from Malaysia. However, IDXA plans to change that by creating opportunities for the people here and the Southeast Asian region to be involved in space activities, from educational to commercial. We want to build an ecosystem or an academy one day. 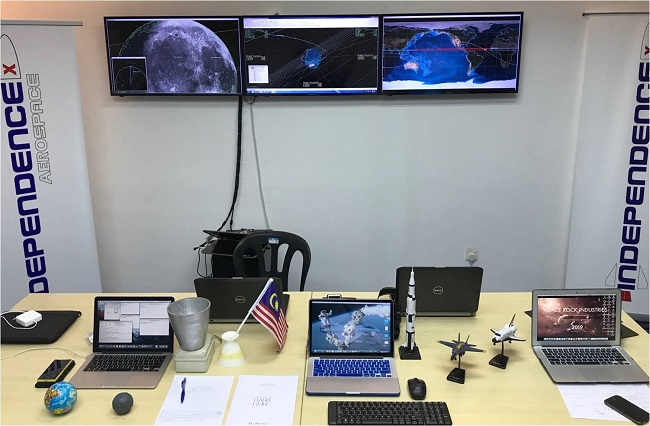 Back in 1990s, the government invested huge amounts in chip and semiconductor facilities which will help pave the way to space technology and development. Sadly it is hugely under-utilized by the locals. As of today, the government’s interest in, appreciation of and understanding of space has diminished. And once again, IDXA wants to change this scenario by creating a platform via our outreach educational program and future space academy and test/qualification facility.

The GLXP will go unclaimed, but are you continuing your partnership with Team Synergy Moon, and could you detail the exact nature of your GLXP project? What is the R&D path forward for IDXA?

The GLXP had ended on 31st March 2018. IDXA will be a standalone team and no longer forging partnership with Synergy Moon, on our private mission to the moon.

The original GLXP requirement was to challenge private companies to send a robotic craft on to the surface of the moon, travel 500 metres and take High-Definition images and videos and transmit back to earth to win the USD 20 million prize money. Unfortunately there was no winner upto the said deadline. That is why IDXA is determined to continue our plans of going to the Moon and modifying our mission parameters to suit our resources.

In terms of R&D, IDXA is currently focusing on rocket booster propulsion and deep space propulsion.

There are number of new players in the LEO launch services space. How do you view them and how are you differentiating yourselves from them? How is the DNLV coming along, and is it on target for 2023?

Fortunately, we view them as community. In fact our philosophy is that we don’t have rivals simply because of the technology we develop; the types and options of services we provide are relatively unique. We are also utilising our own launch capability for our satellites and space craft missions which will be beneficial for science and commercial purposes.

The DNLV has 10 levels or steps to be able to reach orbit for commercial services. As we are currently on the fourth level, where the rocket is named Independence-3A and designed to fly to the Stratosphere. It is on target for a 2023 commercial flight.

How do you see the Asian space industry shaping up? What are some of the challenges faced by space-related companies in Asia, and how can Malaysia catch up with other countries which have a big head-start?

In my opinion, the Asian Space Industry will soon be a leader in the world.

For example, China has to date similar launch frequency as the US at 22% [of global launches], Japan has made strong contribution towards the ISS with the Kibo Module, India had the famous multi-satellite launcher at cheaper price and was the first successful Asian interplanetary mission. Singapore is forging ahead with indigenous satellites and space sensors.

Now the only challenges are government attitude and policy towards space industry overall. And I think if Asia collaborates strongly, we could work towards an Asian Union type space corporation to consolidate all the capabilities and resources to help fast track the industrialisation of Asia itself while Japan, China and Korea have shown good examples of rapid development. It is impossible to look into the future without development in space technology.

Malaysia as a country will never catch up at this current pace. But instead, IDXA prefers to be viewed as a global company that employs people from the whole world and creates a small change that would impact the world in a sustainable way through space technology.

That is why also for the first time ever, IDXA wants to put Malaysia on the world space map alongside big players such as SpaceX and others. In 2014, I was nominated alongside space tech luminaries such as Elon Musk of SpaceX, and Robert Bigelow of Bigelow Aerospace in the World Technology Awards organized by Time and Fortune Magazine. And IDXA will continue to strive.

Why are the Moon and Mars of interest to you for exploration? When do you think human beings will be able to establish colonies there, and how will it benefit mankind?

At IDXA, we don’t look into colonizing these celestial bodies but rather into expanding our capabilities in technology for better use on earth by sending missions to the Moon and Mars.

It is hard to say when humans will set foot on Mars, among the challenges is the travel time and cargo mass — better orbital mechanics and propulsion systems need to be developed to solve these problems.

Irrespective of where mankind lives, we must learn to live sustainably.