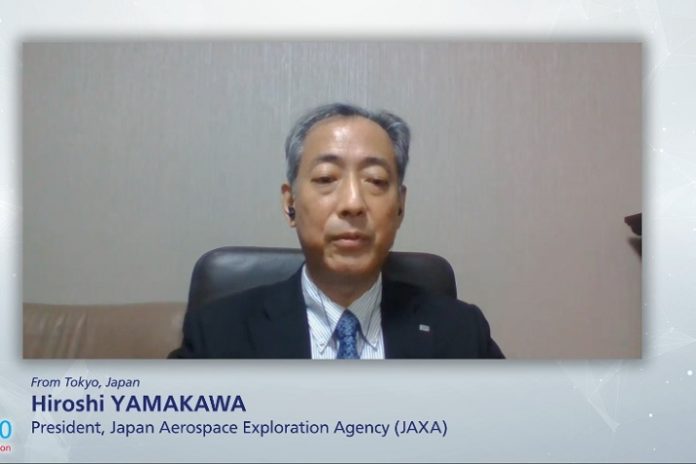 Yesterday, during the International Astronautical Congress (IAC) held virtually for the first time, the traditional Heads of Agencies plenary was held, with representatives from various space agencies. Present at the discussion was Hiroshi Yamakawa, President of the Japan Aerospace Exploration Agency (JAXA), who shared details on Japan’s lunar plans.

Japan will participate in NASA’s Artemis lunar programme, which aims to land “the first woman and the next man” on the Moon, specifically at the lunar south pole region by 2024, and thereafter establish a sustainable human presence on the Moon.

In July this year, JAXA officially became a partner of the Artemis programme, when a Joint Exploration Declaration of Intent (JEDI) was signed between the two space agencies.

Yamakawa elaborated on JAXA’s planned contribution to Artemis, saying, “Specifically, in terms of our participation in the Artemis programme, we will utilize Japan’s expertise in manned and unmanned space technologies accumulated through experiences with the ISS and other scientific explorations.”

He added that Japan will focus on resupply missions and habitation functions on the Moon.

“And we are moving forward with technical considerations for missions, such as providing the [Lunar] Gateway with habitation functions, contributing to resupply missions and sustainable exploration on the lunar surface. For cargo resupply, we will use the heritage of the HTV vehicle, which retired from its mission to resupply the ISS with the HTV-9 this year. The HTV was the first to utilize Japan’s unique rendezvous docking technology and contributed to the overall stability of the ISS by completing its mission without a single failure for 10 years,” he said.

JAXA and ISRO, India’s space agency, are working on a lunar rover and lander that will explore, like Artemis, the south pole of the Moon. The mission, known as Lunar Polar Exploration (LUPEX), is slated to launch in 2023 or after, with a study group having been formed in September.  Yamakawa expressed that the mission eventually aims to develop a manned pressurized rover.

Said Yamakawa, “In cooperation with ISRO, JAXA is continuing its investigation into the lunar polar exploration mission LUPEX to be followed by the development of manned pressurized rover, which is expected to contribute to full-scale lunar exploration.”

Yamakawa said, “The next step to the moon for JAXA is to launch the smart lunar lander called SLIM in 2022 with the goal of acquiring pinpoint landing capability on the lunar surface.”

He added that in future, JAXA might begin the development of a hydrogen fuel station to ensure a sustainable human presence on the Moon.