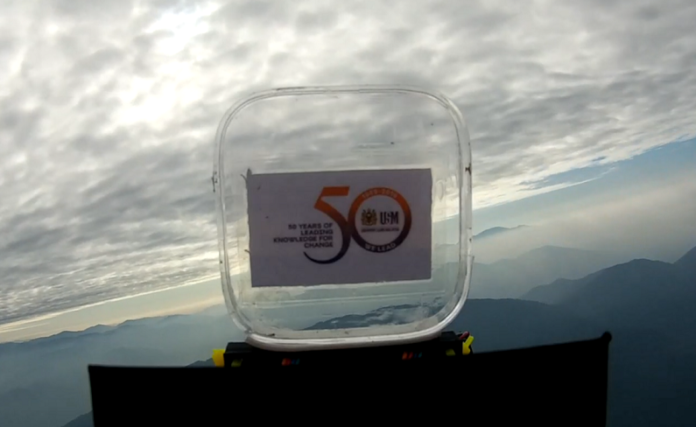 On 1 September 2019, two high-altitude balloons were launched from Kampar, Perak. The first balloon, launched at 9.00 a.m, carried a payload for space photography and an electronic module to be tested in the near-space environment. This hydrogen-filled balloon flew for about 50 minutes and landed 30 km southwest from the launch area. The second balloon, filled with helium, was deployed at 10.30 a.m and carried both a Shape Memory Alloy (SMA) experiment module as well as a communication and tracking module. This balloon flew to an altitude of up to 23 km before it burst and landed about 16 km away from the touchdown location of the first payload.

This first-of-its-kind, joint initiative under the Malaysia-Singapore Near Space Experiments Programme (NSEP) not only gave students a chance to conduct near-space research, but to recover valuable data, including real time flight telemetry and smart material properties, that will aid in the development of better communication protocols and materials for future flight vehicles. The findings are expected to be published in a paper in the near future after thorough analysis. The NSEP was supported by the Singapore Space Technology Association (SSTA), Malaysia Space Initiative (MiSI) and the Aerospace Society of Malaysia (Aeros).

“We have been wanting to do this type of inter-university international collaboration for a couple of years now. And this time we made it happen,” said Dr Salahuddin Harithuddin from the Aerospace Engineering Department of UPM. “What was amazing was that we were involved in almost everything together – from preparation, launching the balloon, to the search and rescue mission. It was a memorable and unique experience for all the students involved. We are now planning something bigger next year and hopefully, we can get even more international students involved, especially from around this region.”

Dr Norilmi Amilia Ismail, the project manager of High Altitude Balloon USM and President of Malaysia Space Initiative (MiSI) said, “We are committed to bringing this high-altitude balloon activity for the benefit of all. The NSEP was the best event to kick-off the international collaboration projects in the space technology field. This initiative will bring forth more projects and involve more countries in the future.”

Mr Lim Wee Seng, Executive Director of the the NTU Satellite Research Centre (SaRC), said “The high-altitude balloon enables students to work together and bring experimental ideas from ground to space. They have to solve problems through engineering and practical means. It is really exciting to see students working outdoors, releasing and chasing the balloon. This forms a good start for them to understand the issues, before embarking on a real satellite project.”

UPM’s payload was a Shape Memory Alloy (SMA), developed under the supervision of  Dr Syaril Azrad. The aim of the experiment was to investigate the performance of SMA at various operating conditions at high altitudes. These shape-shifting alloys changes shape when heated and return to their former shape when cooled, and understanding their performance at extreme operating conditions opens the possibility of designing better actuation mechanisms in airplanes and drones.

USM, which has launched 20 high-altitude balloons since 2013, prepared two balloons filled with hydrogen and helium respectively to test the performance of these two gases in flying the payloads to the stratosphere.

The development of NTU’s payload was led by the NTU Satellite Research Centre (SaRC) and it successfully tested a high-altitude balloon tracking module using extended telemetry. The results of the experiment will be published in the near future after a thorough analysis of the collected data from the on-board data handling system.