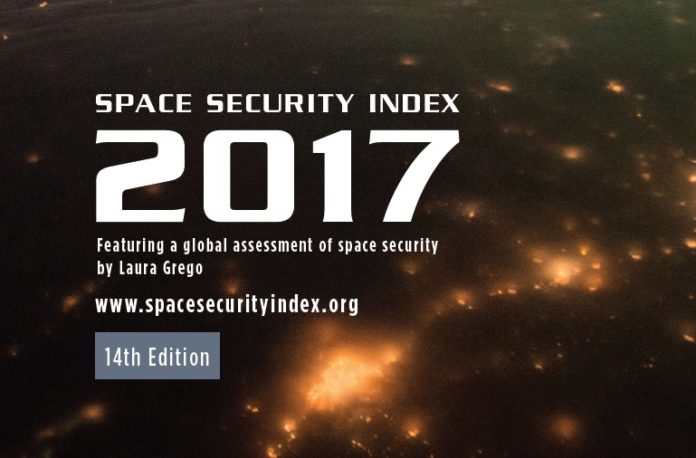 This is the 14th edition of the annual, covering the period between January and December 2016. The 240-page report was collaborative effort by researchers from the University of Adelaide, The George Washington University, McGill University, Project Ploughshares, The Simons Foundation, and Xi’an Jiaotong University.

Like all its previous reports, the SSI 2017 focuses on the “security and sustainability of outer space as an environment that can be used safely and responsibly by all”. Taking a wide interpretation of the phrase, the report covers all aspects of the space industry in 2016, including space policy, agency and commercial space activities, international agreements, and space-based disaster management. A reading of the report presents an excellent overview of the happenings of 2016 as well as the general trends over the years.

As SSI’s primary focus – as its name suggests – is the security of outer space, the report begins by singling out space debris as the biggest threat to space security today. In it is described the current space debris situation, the problems caused by space debris, and the efforts taken to mitigate it.

According to the report, there are several million pieces of orbital space debris today, based on data from the U.S. Department of Defense’s (DoD) Space Surveillance Network, which tracks artificial objects orbiting Earth. Of the several million, 23,000 pieces measure 10 cm or larger in diameter, while at least 500,000 measure 1 cm or larger. Of these, about half are in Low Earth Orbit (LEO), especially the Sun-Synchronous Orbit (SSO) popular for Earth Observation (EO).

In recent years, the report says, there have been two significant contributors to space debris. The first is China’s 2007 anti-satellite missile test (ASAT), which intentionally destroyed its Fengyun-1C satellite in Low Earth Orbit (LEO). The second is the collision of Russia’s LEO communications satellite Kosmos 2251 with Iridium 33 in 2009, which was the first ever satellite collision in Earth Orbit. Fengyun-1C, according to SSI, now accounts for roughly 20% of all catalogued objects, while the collision, along with eight other space missions, account for another 10%  of all debris.

Fortunately, says the report, the number of space debris created each year is decreasing. However, the dangers posed by existing objects still remains.

In 2016, there were a few minor disruptions to space activity due to the impact of space debris. Most significant of these was an undetected piece of debris approaching the International Space Station (ISS), which necessitated the crew taking shelter in the Soyuz spacecraft attached to the ISS.

How to remove space debris?

So far, according to the report, there has been no attempt at Active Debris Removal (ADR), although several agencies and private companies are working towards developing ADR technology. The SSI 2017 summarizes these attempts:

The report also covers the work of international organisations such as the UN Committee on the Peaceful Uses of Outer Space (UN COPUOS) and the Inter-Agency Space Debris Coordination Committee (IADC), and cites the growing number of CubeSats as a potential problem, especially with the advent of constellations. It also shows how there is a lack of will, transparency and funding to truly seek a solution to the problem.

Aside from space debris, the extensive SSI discusses in great detail other threats, e.g., the battle for bands in the Radio Frequency (RF) spectrum and orbital positions, space weather, and Near Earth Objects (NEO) such as asteroids. Other topics, such as spaced-based military power and the use of nuclear energy in space, are also covered, along with the future of the Outer Space Treaty.

The full Space Security Index 2017 report can be found here.