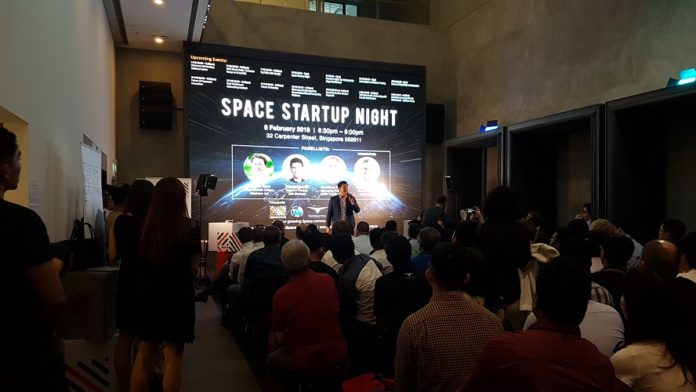 Additionally, aspiring space entrepreneurs were treated to a panel discussion by investors, and were given the opportunity to ask the panelists investment-related questions. The panel discussion was moderated by SGInnovate’s Founding CEO Steve Leonard and included three participants: Atsushi Taira, Chief Growth Officer, Mistletoe Inc. (a Japan-based company that invested in Astroscale); Vishal Harnal, General Partner, 500 Startups (which invested in Gilmour and Trancelestial), and Jonathan Schiff, Managing Director, Schiff Family Office, which invests in early-stage technology companies in Singapore.

The panel discussion provided entrepreneurs with some useful tips on how to get funding, summarized here:

Be passionate about the problem, not the tech

A recurring theme throughout the discussion was the need for entrepreneurs to convince investors of their passion and commitment.

Said Atsushi Taira, “When we invested in Astroscale…we had no idea about space. But Nobu Okada (Astroscale’s founder) was so passionate, and he has that same passion now, some years later. He said nobody’s doing [what he’s doing], and it’s true. Passion is very important, because in space, everything is unknown.”

Steve Leonard added that this passion should be directed towards solving a problem, and not towards the actual technology.

It’s good to be aspirational, but a sound financial basis is necessary

Another point the panelists emphasized on was the necessity of having a financial basis for the company, although being aspirational is important in getting investors excited.

Jonathan Schiff added that being aspirational is an asset, saying, “All the entrepreneurs in the space sector – everybody is really serious, really confronting big issues. We’re facing the next generation of earth’s problems..and I really want to try and make an impact at this stage of my life.”

Panelists suggested that startups seeking investment should approach investors who are already familiar with space, so as to reduce the time needed to convince the latter to invest. They also advised startups against seeking investment only when there is an urgent need, and instead come up with a long-term plan to give time for the investment process.

Said Harnal, “There are at least 2 Venture Capital firms that specialize in space technology. And there are some sovereign funds and family offices that are interested in space. What we’ve noticed is, when you need to sell investors on a certain technology they’re not familiar with already, you need time to educate them.”

Added Leonard, “Also, don’t knock on the door when you’re in the middle of needing something. There’s also some education, some investment of your time, on the technology and also the relationship with the investor, [especially] if you’re educating both on who you are and on the technology.”

How to get grants

Answering a question on the lack of availability of government and institutional grants for the space sector in the region, panelists suggested startups focus on the components of the space industry, rather than the industry per se.

Said Leonard, “Sometimes you make the mistake of thinking, ‘If only someone would support industries’ and we don’t think of it as the individual components…..so we might need to decompose it a little bit and attack from that particular vantage point”.