On November 15, 2017, Singapore Space & Technology Association (SSTA) and the Japan Aerospace Exploration Agency (JAXA) signed a contract to launch a 3U CubeSat “SpooQy-1” from the “Kibo” Japanese Experiment Module (JEM) on the International Space Station (ISS).  SpooQy-1 will attempt to demonstrate quantum entanglement using a CubeSat in Low Earth Orbit (LEO), something that has never been done before.

The 10 cm × 10 cm × 30 cm CubeSat was conceived of, and will be operated by, the National University of Singapore’s (NUS) Center for Quantum Technologies (CQT). 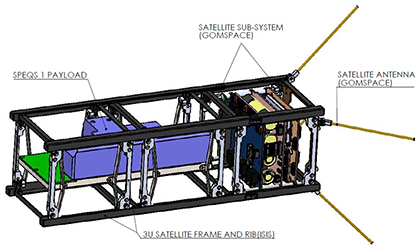 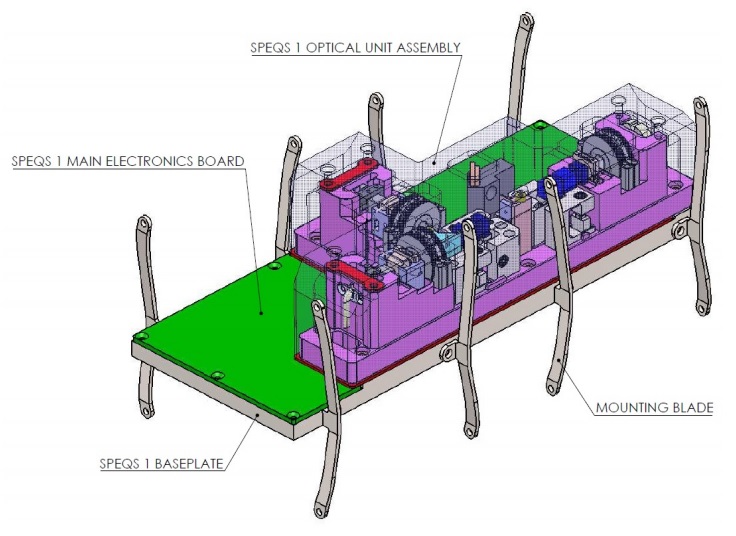 According to a paper from CQT and other institutions authored in August 2015, the goal of the SPEQS-1.0 instrument is to demonstrate that an entangled photon source works in Low Earth Orbit (LEO).

To enable space-based quantum key distribution proposals, “a source of entangled photons ruggedized to survive deployment in space and greatly miniaturised” is needed. The paper further suggests: “The Small Photon Entangling Quantum System is an integrated instrument where the pump, photon pair source and detectors are combined within a single optical tray and electronics package that is no larger than 10 cm x 10 cm x 3 cm.”

In December 2015, NUS launched the 2U CubeSat Galassia, which carried the first demonstration of CQT’s SPEQS system designed in collaboration with the University of Strathclyde. The CubeSat demonstrated the first instance of generating correlated photons in space, and the results were published in May 2016. The goal of SPEQS, however, had always been to generate fully entangled photons.

SpooQy Lab at CQT explains why:

“Photons are highly effective for both classical and quantum communication. In Quantum Key Distribution (QKD) applications, we can use a source of entangled photon pairs to grow a secret key between two parties, provided they share an optical channel. These channels can be either through optical fibers or free-space links, and on Earth, both are currently limited to about 140 km. This limitation is practical: fibers are lossy, and line-of-sight communication links are geographically limited.

“For the future satellite communication technology innovation, the aim is to carry on the orbit demonstration experiment by installing the source of polarized photon entangled photon pair on the satellite.”

Japan is the only participating country from Asia in the ISS. Through the activities of the Asia-Pacific Regional Space Agency Forum (APRSAF), JAXA has invited Asian participants to contribute experiments to be conducted in JAXA’s “Kibo” module of the ISS.

SSTA is a private non-profit organization founded in 2007 — in response to the policy of the Singapore government, it has been a part of the effort to promote space use and has participated in APRSAF since 2010.  So far, SSTA has participated in a simple educational experiment for students conducted at the ISS in 2016 (during the long-term stay of Japanese astronaut Takuya Ohnishi).

“Achieving today’s milestone with JAXA shall pave the way for deeper collaboration between both organizations, and SSTA hopes to leverage this partnership to support similar other initiatives on behalf of the Singapore space community,” said Jonathan Hung, President of SSTA. “The collaboration between JAXA and SSTA on Kibo use will be very important for educational institutions and research institutes in Singapore to expand their access to space.”

Kibo was designed and developed with a view to conducting scientific research activities in orbit. In Kibo, a maximum of four astronauts can perform experimental activities.

Currently, a wide variety of scientific, medical, and educational experiments are conducted on Kibo. As a part of the ISS, Kibo provides opportunities for space environment utilization.

Resources necessary for Kibo’s on-orbit operation, such as air, power, data, and cooling fluid, are provided from the US segment of the ISS.