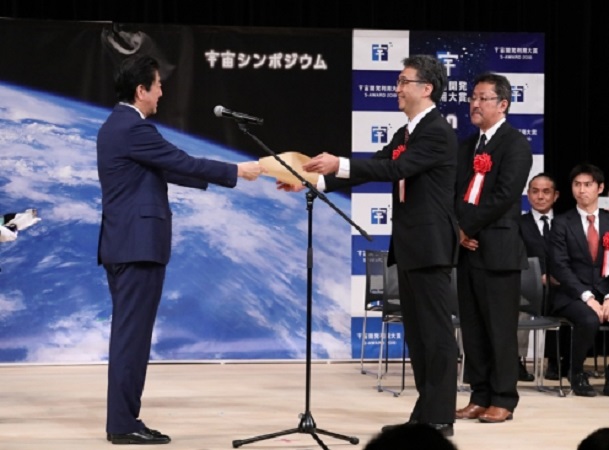 Just before announcing a few days ago that it has created a US$940 million fund for space startups, the Japanese government held its 3rd Space Development Utilization Grand Prize. The event saw various government departments award institutions and companies for space-related projects and technologies. This year 10 projects were awarded, each by a specific government department, giving a clear demonstration of how space technology can be applied to every part of society.

Looking at the list of recipients, and their corresponding technologies, is noteworthy because it gives a clear idea of where the Japanese space industry is headed. Japan currently has one of the most vibrant space startup ecosystems in the world, and the Japanese government is undoubtedly the most active one in Asia when it comes to supporting, promoting and funding space startups. Aside from this, the diversity of space technologies and their applications proves that space technology, like space itself, can be limitless.

Here is a list of all ten recipients and their technologies:

Yamap Co. is a startup that has developed Yamap, the biggest mountaineering app in Japan. This mapping app allows mountaineers and trekkers to use GPS on their smartphones, eliminating the need for a separate GPS receiver. Users can also share their routes with others, and the app has now become a social network for trekkers. The company won the award for helping to protect mountaineers in dangerous situations.

The Foreign Ministry’s award went to Kyutech for its work with the United Nations Office for Outer Space Affairs (UNOOSA). More specifically, the university was awarded for the Long-term Fellowship Programme on Nano-Satellite Technologies, which accepts 6 international students per year for a postgraduate course in nanosatellites and basic space technology.

Tokushima University received the MEXT award for its work on astrobiology and space nutrition, as well as the study of muscle atrophy caused by weightlessness. The studies hope to help develop ways for humans to stay in space for longer periods of time.

A few local government bodies in the Aomori Prefecture, located in Northern Honshu, received the award for using remote sensing and satellite imagery to aid in the production of high-quality rice. One of the methods they use is the study of satellite imagery to determine when the rice should be harvested, as well as to determine the protein count in each stalk of rice padi.

Axelspace won the award for AxelGlobe, a constellation of 50 microsatellites meant for Earth Observation. Axelspace plans to launch 3 initial satellites this year, 7 more by 2020, and complete its 50 constellation by 2022. Each satellite will have a resolution of 2.5m and will be able to image more than half of the planet’s dry land once per day.

Magellan Systems Japan, a developer of GNSS technology, won the award for its high-precision Multi-GNSS receiver, with 1cm positioning accuracy. The receiver is set to receive signals from Japan’s Michibiki GPS augmentation constellation, and will support Japan’s upcoming driverless cars.

STM and Restec jointly won the award for their work on conserving the coastal ecosystem, specifically, in the preservation of seaweed and seagrass beds using high spatial resolution satellite images.

Nakashimada Engineering and Tohoku University won the award for their De-Orbit Mechanism (DOM) for microsatellites, which consists of a thin film that can be deployed when the satellite is to be de-orbited. DOM is now being sold by MakeSat, a division of space startup Infostellar that sells nanosatellite components.