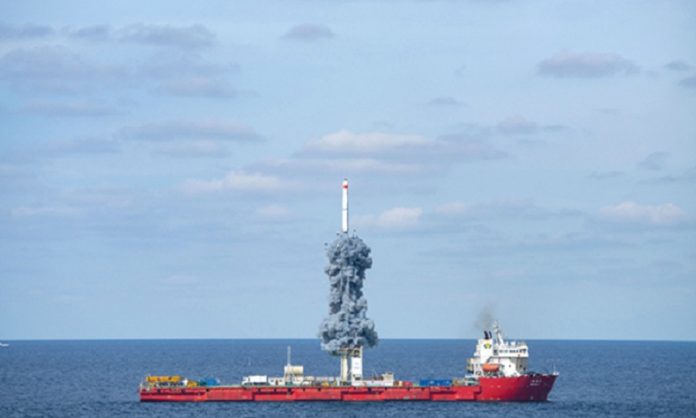 Yesterday (15 September 2020), at 9:23 am Beijing time (GMT+8), China conducted its first commercial sea launch, and second sea launch overall. This took place from a mobile launch platform aboard the vessel De Bo-3, according to Global Times, and saw the Long March 11 carry nine remote sensing satellites from the Jilin-1 Gaofen 03-1 series, into a 535-kilometer Sun-synchronous orbit (SSO). This was also China’s first sea launch into SSO.,

The launch was conducted in the Yellow Sea, off Shandong Province, at the coordinates 34.31° N, 123.76° E. The vessel De Bo-3 is a heavy load carrier built in 2017, and is 160m (L) by 39m (w). De Bo-3 differs from the vessel used in China’s first sea launch on 5 June 2019, Tai Rui, which is a semi-submersible barge that the rocket had to be transported to. On the other hand, De Bo 3 most probably carried the launch vehicle straight from Haiyang City Space Port, which is being built specifically for sea launches. According to vesselfinder.com, the vessel is making its way back to Haiyang and should arrive soon.

The first sea launch took place from a similar location in the Yellow Sea (34.90° N, 121.19° E), also using the lightweight Long March 11 launcher. On that occasion, it took 7 small satellites to Low Earth Orbit (LEO), which also included one satellite from the Jilin-1 series. The Jilin-1 remote sensing constellation is developed by China’s Chang Guang Satellite Technology Co., which in 2018 stated its aim to launch at least 60 satellites by 2020. I believe no one has yet counted the exact number of Jilin-1 satellites already in orbit, but Jilin launches are very frequent.