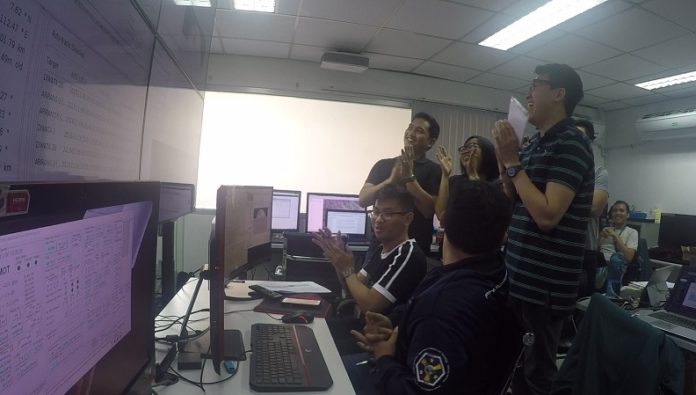 Have you ever wondered how a satellite is tested and brought into an operational state once it has been launched and deployed?

Well, wonder no more because we’ve been along to the microsatellite ground station at DOST-ASTI in Quezon City, Philippines, to find out exactly what has been happening since the launch a couple of weeks ago.

As you may recall, Diwata 2 is an Earth observation satellite designed and built by the folks at DOST-ASTI and UP Diliman, with the assistance of JAXA, the Japanese national space agency.

In addition, Diwata 2 is equipped with an amateur radio system, which when operational will provide additional communications in the event of an emergency.

You can read more about DOST-ASTI and Diwata 2 at our previous article, right here.

Diwata 2 was sucesfully launched and deployed on a Japanese H-IIA rocket from Tanegashima Space Center on 29th October 2018.

It was placed directly into a sun-synchronous orbit, meaning that it will revisit the Philippines at approximately the same time every day. This is important due to the variable lighting conditions throughout the day.  The idea is that as the angle of the Sun will be the same during each revisit, the images captured by Diwata 2 will be in the same lighting conditions, meaning a higher consistency between images over time.

Obviously, being sent up into space on a rocket is a fairly brutal experience, with all the vibrations and the gradual exposure to vacuum and low temperature of space…so you can’t just flick a switch and hope for the best that everything turns on correctly. So a campaign of testing is performed on the satellite in space from the ground, to ensure that the systems are healthy, one by one.

Only then when everything has been tested and calibrated can the small satellite begin its mission.

Rocket operators don’t like satellites to be switched on and powered up when the satellite is on their launch vehicle.

So the satellite is loaded onto the rocket in a charged but dormant state, waiting to be activated by mechanical switches when it is deployed from the rocket.

After that, there is a small period of time where the satellite remains dormant as it clears the rocket body.

The first step in testing the satellite, not surprisingly, is to locate it.

Satellites (and other spacecraft and debris) are tracked by NORAD, who provide regular TLE (two line element) updates as to the position and velocity of the satellite.

So the team used expected/predicted TLE values to locate Diwata 2 until they received the more accurate updates from NORAD.

Interestingly, as Diwata 2 separated from the rocket,  it did so with several other pieces of rocket, leaving the team briefly wondering if the extra bits were actually parts of the rocket…or if Diwata 2 had been deployed in a dozen broken pieces (don’t worry, this is perfectly normal with most launches)…

To determine if the pieces were parts of rocket body or parts of Diwata 2, the team attached a spectrum analyser to the ground station antenna, and pointed it at each piece, querying if the piece responded in the allocated frequency.

After a process of elimination, the team at DOST-ASTI were able to confirm that the extra debris was indeed from the rocket body and that Diwata 2 had been deployed intact. Good news!

Clearly, some payload components have a greater priority than others. After the satellite is located, and the power boot sequence has completed, the team can communicate and send/receive commands from the satellite. In this case, the team were able to communicate with the satellite within the space of a single orbit.

And so, the testing begins according to priority.

After the critical systems such as power, comms, health monitoring had been confirmed, the team moved onto testing the other components.

Being an Earth observation satellite, priority was given to the various cameras and telescopes.

These tests can involve a simple point-and-shoot, just to see if the camera is working, or tests such as pointing accuracy experiments.

DOST-ASTI were testing HPT (high power telescope) and the pointing accuracy during our visit, and we were lucky enough to see the tests as the satellite passed overhead.

Additional tests include calibration tests, which involve pointing Diwata 2’s sensors at the Moon. This type of test is carried out by many different Earth observation satellites, and allows the engineers and scientists to calibrate the sensors to detect any darker patches on the Earth, by using the Moon as a reference point. It’s fairly constant in terms of surface features and brightness, and so is very useful for such things.

Further optical tests on the MFC and multispectral camera are scheduled for this week.

After the main instruments have been given the all-clear, the team will move onto the secondary payloads, such as the amateur radio antennae and radio package.

The antennae are spring actuated and are held in place by something similar to fishing line (it might actually be fishing line)…to release the antennae, an electrical charge is passed through an element which heats up and melts the line. Once the line is cut, the antennae are deployed, and the team will begin testing the ham radio system, using morse code generators located on Diwata 2 itself.

DOST-ASTI will also collaborate with local ham radio groups to test the system. It will be these folks using it ,after all!

Once all systems have checked out, Diwata 2 can begin its mission, which can be broken down into 2 categories.

Case A use will be focused on the main mission of Earth observation (and detailed mapping of the Philippines), and will make use of the optical suites and the information will be shared with the appropriate government agencies.

Case B usage will focus on emergency scenarios and will make use of the optical and communications suites.

Most of the usage will be devoted to Case A scenarios…we hope!

We will bring you more news from DOST-ASTI and Diwata 2 as and when it happens.