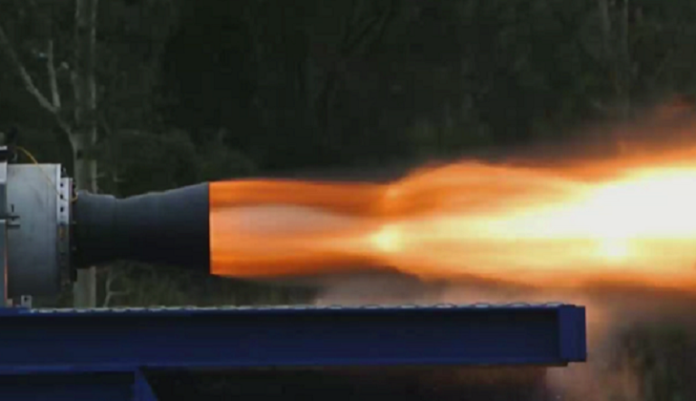 Gilmour Space Technologies, a rocket company based in Australia/Singapore, has just announced the success of the first of its full-scale orbital engine tests.

In December, Gilmour Space conducted ground tests of its orbital-class rocket engine, consisting of a hot-fire test and a short- duration, low-pressure test.

“We started with a full-flow, mono-propellant thruster hot fire of our large catalyst pack,” said the company’s CEO and Founder, Adam Gilmour. “This is a critical subsystem of our main orbital engine, and it efficiently decomposed our Hydrogen Peroxide oxidiser at a core temperature well above the ignition temperature of our fuel.”

“There was almost instant ignition in our large-diameter (46 cm) single port motor, and we generated over 45 kN of thrust,” added Gilmour. “That’s enough force to lift two of SUVs off the ground.”

“This is significantly more thrust than some of our small satellite launch competitors’ main engines, and we expect to do much better in our full-pressure and full- duration test firings later this month.”

The success of these tests puts the company in good stead to meet its 2020 target for the first orbital launch of its hybrid rocket, which will be propelled by a hydrogen peroxide and a proprietary 3D-printed solid fuel.

Prior to its orbital launch in 2020, the company is aiming to conduct a suborbital test launch from Australia in the second quarter of 2018. Gilmour Space is currently the only space startup in Australia and Singapore working on orbital launch vehicles, and managed to close AUD 5 million (USD 3.7 million) in Series-A funding in mid-2017.