Spire Global is a prominent NewSpace company with offices in San Francisco, Boulder, Glasgow and Singapore. The company develops its own CubeSats, which it uses to collect data that it monetises.

Founded in 2012, Spire Global was initially funded by a Kickstarter campaign, from which it raised US$106,330 to build and launch its first CubeSat. Recently, it closed its Series C funding round, where it raised US$70 million and secured the Luxembourg Future Fund (LFF) as a shareholder. Following this, the company will soon open a new office in Luxembourg, which will serve as its European headquarters.

SpaceTech Asia spoke to Mark Dembitz, head of Business Development in the Asia-Pacific (APAC) region, in Spire’s office in Singapore, about Spire’s activities generally and in APAC.

What is your business model?

We are very specifically a data company. Our technical expertise is in three areas – (1) building and launching satellites, (2) the software that runs on the satellites so that we can continuously improve the yield of the satellites – once a satellite is launched you can’t change the hardware, but we can refresh the software on the satellite, and (3) the mechanisms by which customers obtain the data. So we are putting together and building a suite of APIs that will allow customers to interact with their data in various ways. We want to build very strong, very powerful tools.

How many satellites does Spire currently have in orbit and how many more do you plan to add to your constellation?

Spire currently has 40 satellites in orbit. We’ve launched a total of 50+ since we first launched our test satellites. We currently plan to have between 60 and 70 in orbit by the end of this year. We aim to have a constellation of around 120 at any one time.

So the model we follow is: build them quickly, launch them quickly, and improve the data quickly so that we can have a constellation with an exponentially improving data product.

How long is the design life of each?

They have a relatively short life span by intention, so we can follow the development pace of technology. We keep the constellation at an average of 2 years.

We all change our mobile phones every 2-3 years because the technology is better. Why shouldn’t we change our satellites? It’s the same thing, it’s just electronics.

The reason why, historically, it’s never been done is because satellites were very expensive to build. But with the advent of CubeSats – which is exclusively what Spire uses – we leverage low cost and rapidly improving electronics. Our satellites are designed to de-orbit automatically after between 2 and 5 years in space. 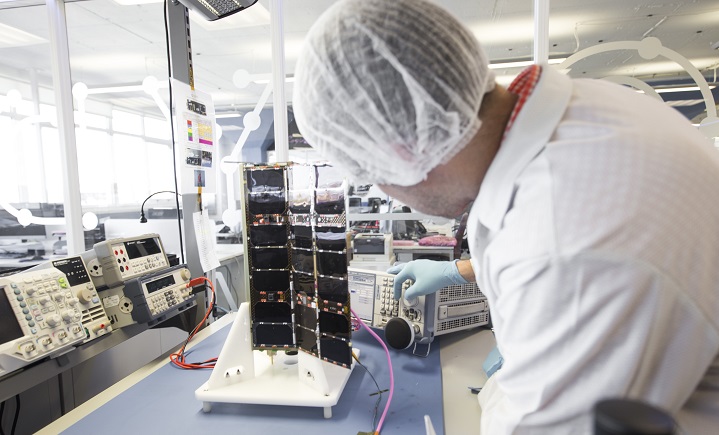 How is your constellation designed?

The way we like to think of it is, at any given moment in time, at any location on earth, if you look up, what is the percentage probability that a Spire satellite is up there looking down at that very spot? That’s the way we like to think of coverage. With 40 satellites today, if you randomly pick a place on earth, there’s probably a 50-60% chance that at any given moment, there’s a Spire satellite overhead. Once we reach 80-100 satellites, that probability goes up to high 80s, 90%. It’s also important to differentiate, though, that the number is an average globally. If you look at various parts of the world, that number will change. So we have a significant number of satellites in polar orbits, which means that even today, the coverage of the polar areas is quite significant. We have satellites in equatorial orbit, so that is decent too. The temperate zones are the hardest regions but we have those covered as well.

What is your launch strategy?

We typically launch between 4-8 satellites each time. Cost is a very important factor. We exclusively launch on secondary payloads. We don’t do primary payload for cost reasons. The other important reason we don’t do primary launches is risk. You could, in theory, defray the cost of a launch by putting many, many satellites on board one launcher. The problem is, if that is the one launcher that happens to fail, then we stand to lose a lot.

So our launch strategy is a diversification strategy — we want to launch with as many individual launch providers as possible, in a very distributed way.

Also, if one launch provider fails, we don’t want to be tied to the same launch provider for the subsequent launches because there’s an investigation period so it pushes back all the launches. That diversification of risk is key to our business model.

How many ground stations do you have?

We have 26 ground stations today, distributed throughout the world. Ultimately, the size and location of our ground station network is built to compliment the number of satellites and locations strategic to lowering latency. Today we have a handful in APAC and Europe, and quite a few in America. The goal is to expand this and to add significantly more in APAC and Europe. 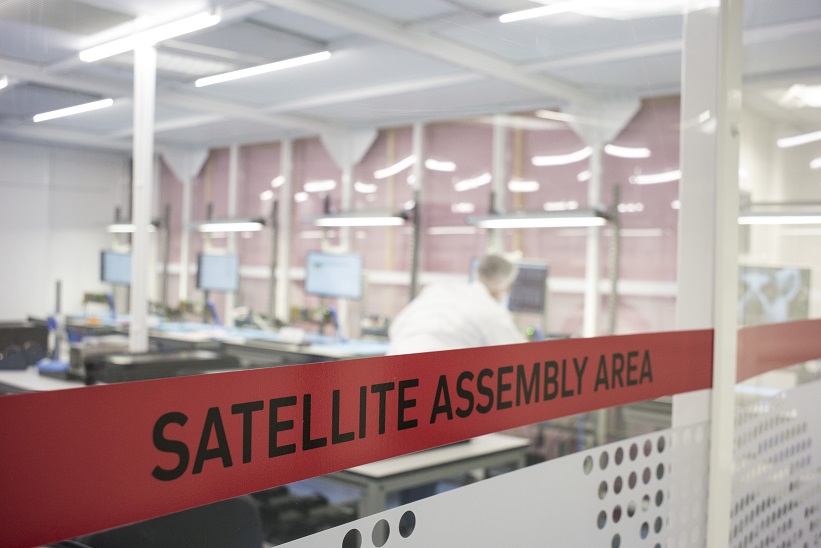 What will your Series C funding go towards?

The money is going to be spent in all the various areas. This is money for growth – more satellites, more people, a new office in Europe. But it’s not just for the office in Europe – it’s also for expanding our activities in the U.S. and in Asia-Pacific.

What does your Singapore office do and do you plan on expanding in APAC as well?

Singapore is our APAC headquarters, it’s our only office in APAC. Given the nature of our business, we don’t necessarily plan to have multiple APAC offices, but we do plan on expanding the Singapore office. Today, you could say it is a special unit focused on our maritime activities. We’re about 15 people in Singapore and the majority are software engineers, working on maritime activities like ship-tracking. The APIs are built mostly out of here.

How is Spire’s data useful, e.g., in solving the illegal fishing problem in Indonesia?

A year and a half ago, we signed an MoU with the Indonesian government to help them with their illegal fishing needs based on automatic identification system (AIS) information. And we’re working with various parties, one of which is Global Fishing Watch, to combine our data with other algorithms.

How this works is, every vessel above a certain size is mandated to carry an AIS transponder to prevent ships from colliding. Each vessel has a beacon that is continuously sending out signals saying “I am Ship XYZ” etc. This is all public information, carried by radio frequency. We capture the signal, and therefore we know where the vessels are. There’s a lot you can do with this. For example, a vessel might ping an average of every 15 or 20 min, then suddenly disappear for 2 hours. We can’t say this is illegal fishing, but we can say it’s a red flag. When combined with machine learning algorithms, and other data, it can be an extremely powerful tool. 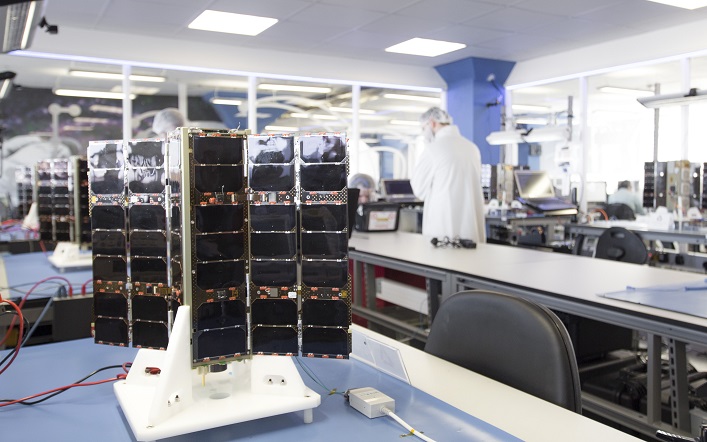 What are Spire’s plans for the future?

In response to the MH370 disaster, International Civil Aviation Organization (ICAO) mandated that all aircraft above a certain size have to carry an automatic dependent surveillance – broadcast (ADS-B) transponder. And that transponder has to be tracked at a minimum of every 15 minutes. There’re a lot of land-based ADS-B and radar, etc. But when you’re above the ocean, where there’s nothing, you can no longer do that. So that’s what this is supposed to address, and that starts next year for us.

We have a third product we’re working on currently, that should also be available next year. We will collect GPS Radio Occultation (GPSRO) signals and sell that to weather forecasting companies and agencies. We’re the only company today that can do that commercially. We’ve had a very successful trial with the National Oceanic and Atmospheric Administration (NOAA) in America that’s proven this.

The number of satellites we have is going to gather enough GPSRO data to have significant commercial impact on markets and business. If you think about the markets that weather impacts – you’re talking really, really big numbers, whether it’s disaster recovery, Oil & Gas, shipping, military, or agriculture. If you could increase the quality of your weather prediction significantly, and increase the localization of it, then there’s so much you could do with it.

What are your thoughts on the commercial space industry, especially in APAC?

I think NewSpace is tremendously exciting.

You have an industry that’s super old-fashioned, that’s being completely changed, little by little, by the advent of CubeSats and cheaper technologies that you can build quickly, that you can develop Silicon Valley-style — software style.

It’s also rejuvenating countries. Especially in APAC, where you have a lot of small countries who have just been sitting on the sidelines. It’ll probably happen in academics first. Spire is also tremendously excited to be part of the NewSpace industry in general, but to also be one of the pioneering NewSpace companies in Southeast Asia and in Singapore.