On 20 October 2017, Mitsubishi Heavy Industries (MHI), which deals in launch vehicle technology, missiles, aerospace components and air-conditioners, released its annual MHI Report summarizing the company’s activities over the past year.

The MHI Report 2017 covers the period between 1 April 2016 and 31 March 2017, and is categorized according to MHI’s three main industry domains – “Industry & Infrastructure”, “Power Systems”, and “Aircraft, Defense & Space”. The total net sales for all sectors amounted to ¥3914 billion (approximately US$34.5 billion), with the Defense & Space Systems accounting for approximately 12% of the entire company.

MHI attributes the drop in net sales primarily due to decreased sales of missile systems. However, the space-related business saw growth due to the increased number of launch orders using the company’s H-IIA/B vehicles, which are frequently used by Japan’s space agency JAXA. In 2016, MHI received orders to launch JAXA’s Michibiki satellites, and an order for an H-II transfer vehicle. Nevertheless, Integrated Defense & Space Systems still outweighs MHI’s commercial aviation arm in terms of net sales. 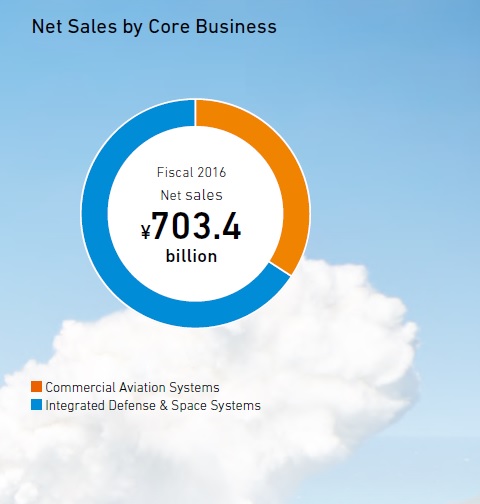 In terms of its space strategy, MHI sees its biggest competition coming from US NewSpace companies entering the overseas launch market, which offer more competitive prices. However, the report acknowledges the growing satellite market, both domestically in Japan and in emerging countries, highlighting Japan’s Basic Plan on Space Policy’s prediction that the Japanese satellite market will grow to ‎¥5 trillion in the next 10 years. To leverage on this, MHI plans to penetrate the global launch services market with its new price-competitive H3 launch vehicle, currently under development.

The MHI Report does not focus specifically on space and conflates the defense, space and commercial aviation industries – MHI, being the largest defense contractor in Japan, seems to be focusing more on defense technology than on space. Therefore, it is generally unclear what proportion of the business is related to commercial space activities, and exactly what space-related contracts have been signed in the past year.