Indonesia’s space agency LAPAN is planning to operate an experimental microsatellite constellation by 2020, said Head of LAPAN Prof. Dr Thomas Djamaluddin. The announcement was made at the Global Space and Technology Convention (GSTC) held in Singapore from 1-2 February 2018.

Currently, said Prof. Djamaluddin, LAPAN is developing two microsatellites, Lapan A4 and Lapan A5. These will add to LAPAN’s first three remote sensing satellites, Lapan A1, A2, and A3, which were launched in 2007, 2015, and 2016 respectively, all aboard India’s PSLV. The first microsatellite launched 10 years ago, Lapan A1, has far exceeded its design life of 2 years.

All the satellites will work towards national development goals – Lapan A4 will carry a multispectral imager and will be used for maritime surveillance, whereas Lapan A5 be the world’s first microsatellite to carry a Synthetic Aperture Radar (SAR), developed by Chiba University in Japan. The previous satellites have also been used for scientific and national development goals, most notably, agriculture and ship monitoring.

All the currently operational satellites have a mass of between 50-120kg, whereas LAPAN aims to make its upcoming satellites slightly larger, with masses of between 100-300kg. This will pave the way for Indonesia to develop larger indigenous satellites, the first of which is targeted for the year 2021.

Said Prof. Djamaluddin, “So far we have made  3 microsatellites – LAPAN A1, A2 and A3, and now we are preparing the Lapan A4 and lapan A5, and we hope that after 2020, we will have an operational microsatellite constellation”.

Concurrently, Indonesia is also developing its own orbital launch vehicle; LAPAN regularly launches indigenous sounding rockets, which the agency hopes will form the basis of a larger launch vehicle. 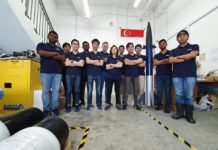 The engineering ingenuity of Rocket Lab’s Electron and Photon

September 12, 2020
Rocket Lab’s Electron vehicle, which is all about providing low-cost access to space for small payloads, is back in service after a...

Interview: CEO of SpaceChain on blockchain, shared constellations & crowdfunding for...