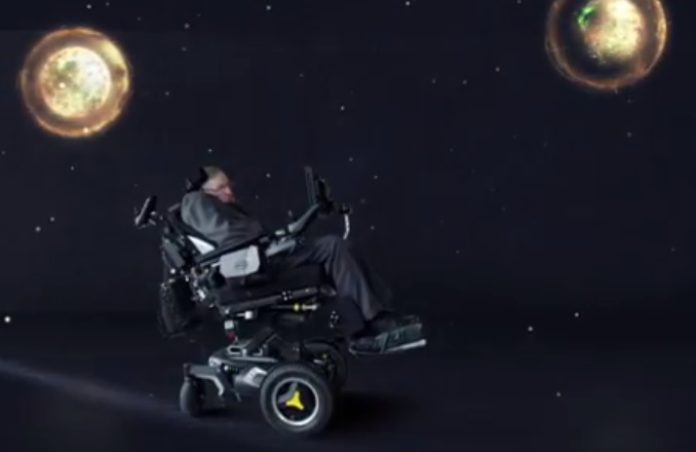 On Sunday, one of China’s largest Internet companies Tencent held its annual WE Summit in Beijing. This year the conference opened with a video address by Stephen Hawking, who has become immensely popular in China.

During his presentation, Hawking gave an overview of Breakthrough Starshot, a project to send tiny nanocraft to Alpha Centauri in search of a possible future home for humanity. Founded in April 2016 by Hawking and Russian tycoon Yuri Milner, with Mark Zuckerberg serving on the Board, the project is a global one; Breakthrough Starshot is working with the European Southern Observatory (ESO) and National Astronomical Observatories of China (NAOC), amongst others, to search for habitable planets in Alpha Centauri.

Detailed below is Hawking’s speech at the summit, which outlines the purpose behind the project, and its goals and challenges.

…the Earth is becoming too small for us. In the last 200 years, the growth has become exponential. That is, the population growth by the same percentage each year. Currently, the rate is about 1.9% a year. This may not sound very much, but it means that the world population doubles every forty years. I will celebrate my 80th birthday in 2022, and in my lifetime, the world’s population has quadrupled. This exponential growth cannot continue into the next millennium. By the year 2600, the world’s population would be standing shoulder to shoulder, and the electricity consumption would make the Earth glow red hot. This is untenable.

Why space exploration is important

But I am an optimist. I believe we can avoid this potential for Armageddon, and the best way for us to do this is to move out into space and explore the potential for humans to live on other planets. But what would be the justification? Aren’t there better causes here, on Earth? In a way, today’s situation is like that in Europe before 1492. People might well have argued that it was a waste of money to send Columbus on a wild goose chase. Yet the discovery of the New World made a profound difference to the Old. It became a utopia for the disenfranchised, when other options seemed closed. Spreading out into space will have an even greater effect.

It will completely change the future of the human race and maybe determine whether we have any future at all. It won’t solve any of our immediate problems on planet Earth, but it will give us a new perspective on them and cause us to look outwards rather than inwards. Hopefully, it would unite us to face the common challenge.

The search for extraterrestrial life

What will we find when we go into space? Is there alien life out there, or are we alone in the universe? We believe that life arose spontaneously on the Earth and evolved to be supremely compatible with the Earth’s resources.  So it must be possible for life to appear on other suitable planets. But even if the possibility of life appearing on a suitable planet is very small, since the universe is infinite, we can assume that life would have appeared somewhere. If the probability is very low, the distance between two independent occurrences of life would be very large.

Are space colonies in our solar system feasible?

The Moon and Mars are the most obvious sites for space colonies in the solar system. Mercury and Venus are too hot, while Jupiter and Saturn are gas giants with no solid surface. The moons of Mars are very small and have no advantages over Mars itself. Some of the moons of Jupiter and Saturn might be possible. Europa, a moon of Jupiter, has a frozen ice surface. But there may be liquid water under the surface, in which life could have developed. How can we find out? Do we have to land on Europa and drill a hole?

Interstellar travel must be a long-term aim. And by long term, I mean over the next 200-500 years. However, there is an alternative. Last year, I joined with the entrepreneur Yuri Milner, to launch Breakthrough Starshot, a long-term research and development program, aimed at making interstellar travel a reality. If we succeed, we will send a probe to Alpha Centauri, our closest star system to the Solar System, within the lifetime of some of you here today.

What will Breakthrough Starshot do?

Breakthrough Starshot is a real opportunity for Man to make early forays into outer space, with a view to probing and weighing the possibilities of colonization. It is a proof of concept mission and works on three concepts – miniaturized spacecraft, light propulsion, and phase-locked lasers. The StarChip, a fully functional space probe reduced to a few centimeters in size, will be attached to a lightsail. Made from metamaterials, the lightsail weighs no more than a few grams. It is envisaged that a thousand StarChips and lightsails – the nanocraft – will be sent into orbit. On the ground, an array of lasers will combine into a single very powerful light beam. The beam is fired through the atmosphere, striking the sails in space, with tens of gigawatts of power. The idea behind this innovation, is that the nanocraft ride on the light beam. Not quite to the speed of light, but to a fifth of it, or one hundred million miles an hour. Such a system could reach Mars in less than an hour, reach Pluto in days, pass Voyager in under a week, and reach Alpha Centauri in just over 20 years. Importantly, the StarChips’ trajectories may include a flyby of Proxima-B, the earth-sized planet that is in the habitable zone of its host star, Alpha Centauri. Only this year, Breakthrough and the European Southern Observatory joined forces to further a search for habitable planets in Alpha Centauri. So far, so possible.

However, there are major challenges. A laser with a gigawatt of power would provide only a few Newtons of thrust. By the nanocraft compensate for this by having only a mass of only a few grams.

The engineering challenges are immense. The nanocraft must survive extreme acceleration, cold, vacuum, and protons, as well as collisions with junk such as space dust. In addition, focusing a set of lasers totaling one hundred gigawatts on the solar sails will be difficult due to atmospheric turbulence.

There are serious questions. How do we combine hundreds of lasers through the motion of the atmosphere? How do we propel the nanocraft without incinerating them? And how do we aim them in the right direction? Then we would need to keep the nanocraft functioning for 20 years in the frozen void so they can send back signals across 4 light years.

But these are engineering problems and engineers’ challenges tend, eventually, to be solved.

As it progresses into a mature technology, other exciting missions can be envisaged. And if Breakthrough Starshot should send back images of a habitable planet orbiting our closest neighbor, it could be of immense importance to the future of humanity.

The human race has existed as a separate species for about 2 million years. Civilization began about 10,000 years ago and the rate of development has been steadily increasing. If the human race is to continue for another million years we will have to boldly go where no one has gone before.